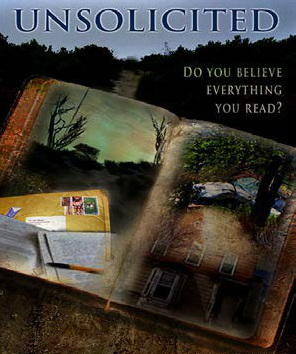 Christine Bradley, a thirty-something editor for a NYC publishing company, retreats to her late parent’s Upstate New York home in late January to recover emotionally from the death of her husband in a Manhattan train accident.

As Christine approaches the front door she sees a battered yellow envelope lying on the Victorian porch, partially covered in snow. Thinking it is an unsolicited manuscript someone had dropped off at her parent’s house, she absent mindedly tosses the envelope aside since she is not allowed to read unsolicited material. Days pass in the cold, empty house and out of boredom Christine goes against company policy, opens the envelope, and begins reading the manuscript.

The story she reads is about a thirty-something editor for a NYC publishing company who retreats to her late parent’s Upstate New York home in late January to recover emotionally form the death of her husband in a Manhattan train accident.

Unsolicited, by Matthew Donahue
​Donahue Literary Properties LLC, 2014--2021, all rights reserved.
Contents of this site including text and media may not be reproduced without prior written consent.
​Audio and video elements of this site are property of their respective owners and are used with permission.
Any views, opinions, or information contained in articles or links to articles and other websites posted on this site by third party author(s) are solely those of the author(s) and do not necessarily represent those of this website.