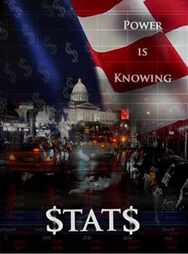 A young veteran, just back from serving in Afghanistan, drives a cab in Manhattan while he writes the great American novel. After picking up a nervous, sweating fare near Grand Central Station, he drives the man to Washington DC. Upon exiting the cab, the man is struck by car but survives and runs away. However, he leaves behind in the cab a briefcase that contains unbelievable data that if true, indicates that every American Presidential election since 1948 has been rigged by the release of statistical information that is false.

This data has been compiled and released by 4 econometric forecasting companies that formed a secret alliance in 1948 to release information that will determine each presidential election. They will reveal this information to the right people for the right price. Knowing who will be the next US President years in advance is information foreign countries, multinational companies, and billionaires world- wide will pay big money for. When it is determined that proof of that information is in the possession of a wanna- be writer, a price is placed on the cabbie’s head. While the cabbie can take care of himself, it is his wife, also back from Afghanistan, who the bad guys should fear most especially after they threaten her and her new born son.