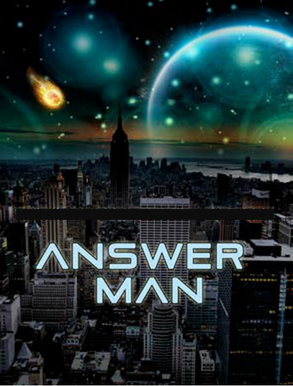 Donald has lived in the US for awhile…almost 200 years. He likes the Earth alright but sees the telltale signs that we have pretty much wrecked the joint given the rising sea levels, global warming, bad air, bad water and a generally bad attitude that folks from other parts of the galaxy see as arrogant--even illegal in a galactic sort of way.

For centuries this inter-galactic alliance has been protecting us when meteors have headed our way.  They would vaporize them in deep space before our limited math abilities could even detect Earth will be turned to an ash if these big rocks ever hit us.

But the guys from the other planets have decided they are not going to save us this time--they are going to let us get smashed to dust and give Earth a fresh start.

Donald pleads with his bosses for a last chance for the  Big Blue Marble.  He has a plan, but he needs to get the people of Earth to listen.  So he sends a letter to 7 specially selected candidates around the world who he thinks can help deliver his message to the rest of the world.

If they fail, the Earth dies.  If they succeed, much of life of Earth still dies.

It's a matter of who and when. No decision is ever easy.

Copyrighted Material. All Rights Reserved.
​Donahue Literary Properties LLC, 2014--2021, all rights reserved.
Contents of this site including text and media may not be reproduced without prior written consent.
​Audio and video elements of this site are property of their respective owners and are used with permission.
Any views, opinions, or information contained in articles or links to articles and other websites posted on this site by third party author(s) are solely those of the author(s) and do not necessarily represent those of this website.